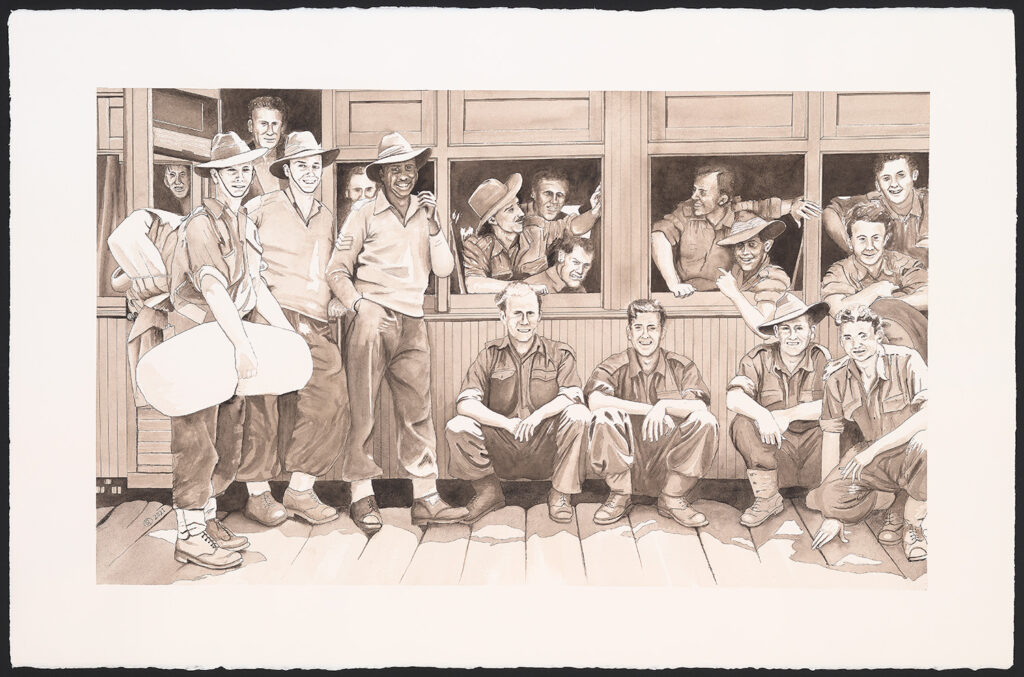 ‘Uncle Reg’ depicts Uncle Reginald Walter Saunders (Reg) surrounded by his mates of the 2/7th Australian Infantry Battalion in 1943. It is a story of comradeship, earnest smiles on the faces of each young Australian soldier on route to a military campaign in Wau, New Guinea. Uncle Reg was a Gunditjmara man born on Framlingham Aboriginal Reserve in 1920, the first Aboriginal soldier to reach the rank of officer in the Australian Army. Despite the trial and tribulation of war, the 2/7th Australian Infantry Battalion became a place absent of the racial division felt on home soil. On the battlefield of New Guinea and in the Barracks, Uncle Reg was unreservedly embraced by his fellow soldiers, as false values did not flourish on the front-line.

But this story is not without adversity. The respect gained by Aboriginal soldiers on the battlefield did not return home to Australia when they did. Many black diggers like Uncle Reg suffered racism and discrimination when they arrived home, not granted land in the Soldier Settlement Scheme unlike their non-Aboriginal counterparts. While this piece captures the mateship and comradery within the 2/7th Australian Infantry Battalion, it illustrates how fleeting this embrace was, and still is.